Eric Cervini discusses The Deviant’s War: The Homosexual vs. the United States of America, in conversation with Dustin Lance Black 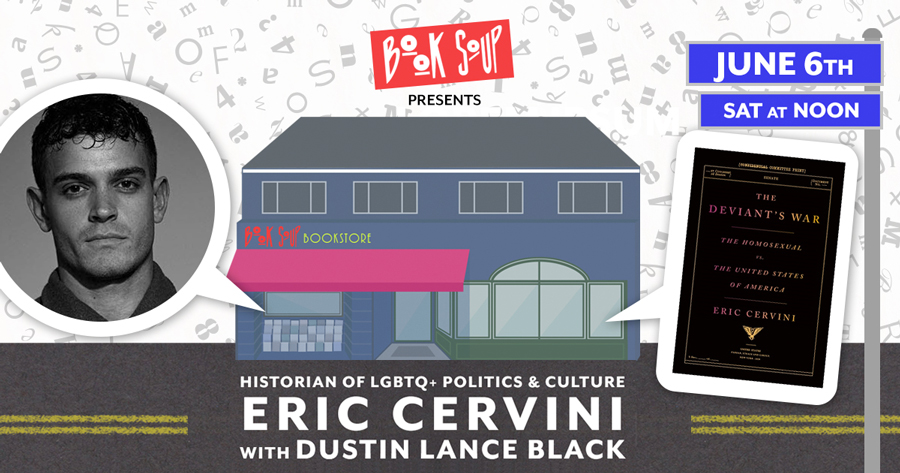 In 1957, Frank Kameny, a rising astronomer working for the U.S. Defense Department in Hawaii, received a summons to report immediately to Washington, D.C. The Pentagon had reason to believe he was a homosexual, and after a series of humiliating interviews, Kameny, like countless gay men and women before him, was promptly dismissed from his government job. Unlike many others, though, Kameny fought back.
Eric Cervini's The Deviant's War is the story of what followed. This book is an assiduously researched history of an early champion of gay liberation, one who fought for the right to follow his passion and serve his country in the wake of Joseph McCarthy's Lavender Scare. We follow Kameny as he explores the underground gay scenes of Boston and Washington, D.C., where he formulates his arguments against the U.S. Government's classification of gay men and women as sexual perverts. At a time when staying in the closet remained the default, he exposed the hypocrisies of the American establishment, accelerated a broader revolution in sexual morals, and invented what we now know as Gay Pride.
Based on firsthand accounts, recently declassified FBI records, and forty thousand personal documents, The Deviant's War unfolds over the course of the 1960s, as the Mattachine Society of Washington, the group Kameny founded, became the first organization to protest the systematic persecution of gay federal employees. It traces the forgotten ties that bound gay rights to the Black Freedom Movement, the New Left, lesbian activism, and trans resistance. Above all, it is a story of America (and Washington) at a cultural and sexual crossroads; of shocking, byzantine public battles with Congress; of FBI informants; murder; betrayal; sex; love; and ultimately victory. (Farrar, Straus and Giroux)

The Deviant's War: The Homosexual vs. the United States of America (Hardcover)