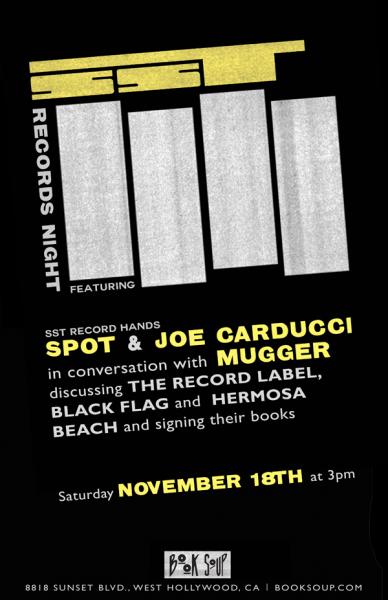 Enter Naomi by Joe Carducci, is a memoir of the west coast music world in the years 1976 to 1986, with special attention paid to Los Angeles, SST Records and the late music photographer Naomi Petersen.

Spot landed in Hermosa Beach, CA in the mid-1970s. A serious musician, he helped build Media Art Recording Studio and stumbled into photojournalism via Easy Reader, the local news weekly. Hermosa proved to be a crossroads abounding with oddball roller skaters who were mostly overshadowed by Venice disco rollers and the Dogtown-inspired leaps into professional skateboarding (never mind that the first skateboard competition ever was in Hermosa in 1963). Then, in the late 70s, a cultural shift hit, fueled largely by music. This time the South Bay was in the vanguard. Spot became the in-house producer and engineer at SST Records--the label founded in 1978 by Greg Ginn as a vehicle for Black Flag, the band that defined LA hardcore. Between 1979 and 1985, he recorded, mixed, produced or co-produced most of SST's pivotal acts, working on all of Black Flag's greatest releases, and on classic albums by the Minutemen, Meat Puppets, Saint Vitus, Descendents, Big Boys, Husker Du, The Dicks, Subhumans and Misfits. Throughout this period, Spot remained a master photographer who documented various Los Angeles subcultures in intelligently composed black-and-white photographs. As this volume reveals, there was no distinction between the musical and the visual--he heard what he saw; saw what he heard--hence, the title of this collection. Spanning the late 1960s through the early 1980s, Sounds of Two Eyes Opening offers an amazing portrait of Southern California beach life, set against the dark clubs and rehearsal spaces of the burgeoning punk scene. (Sinecure Books)