Jim Florentine discusses and signs Everybody is Awful (Except You!) 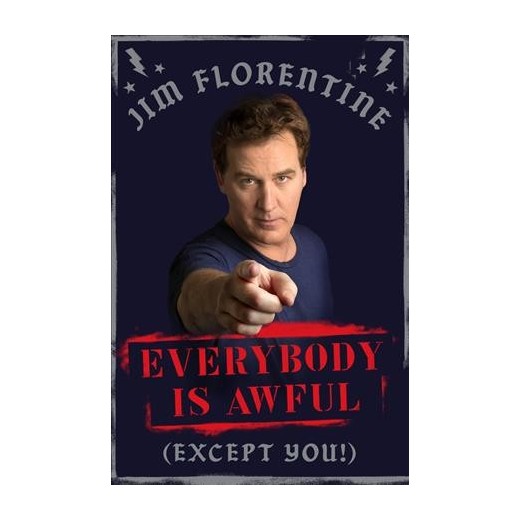 Twitter Trolls. Facebook Freaks. Instagram Exhibitionists. These are just a few of the creatures our technology-obsessed culture has spawned in its quest to simplify our lives. The madness is so universal now that everyone has dealt with it. You login to Facebook, read a stupid post, and immediately want to tell your "friend" to go have relations with himself. Sure, social media may keep us connected, but it is a breeding ground for idiots, and these idiots have crowd-sourced a storm of useless information, corny jokes, and douchebag drama that's wasting our time and screwing with our peace of mind.

Thankfully, popular comedian and television host Jim Florentine has a solution for those of us on the verge of bashing our iPhones to bits. In Everybody Is Awful, Florentine attacks awful people and awful situations with the same biting satire and cringe-worthy humor that made him famous on television shows like Crank Yankers, Meet the Creeps, and That Metal Show.  Along the way, Everybody Is Awful takes readers through the author's formative years, a time filled with rebellion and horrible behavior, to the crazy early days of his career as a stand-up comedian. Florentine also recounts how he developed an obsession with pranks that morphed into his uniquely vigilante style of comedy and made him one of the most legendary prank callers of all time.  Florentine excels at channeling the core rage we all feel at the seemingly small annoyances of life and his fans love the cathartic experience of his hilarious ranting and raving, a tradition continued in Everybody Is Awful. Acting as a de facto therapist, Florentine diagnoses awful behavior, shames awful people, and offers comedic takes on how to reclaim our lives from it all.  (Da Capo Press)

Everybody Is Awful: (Except You!) (Hardcover)