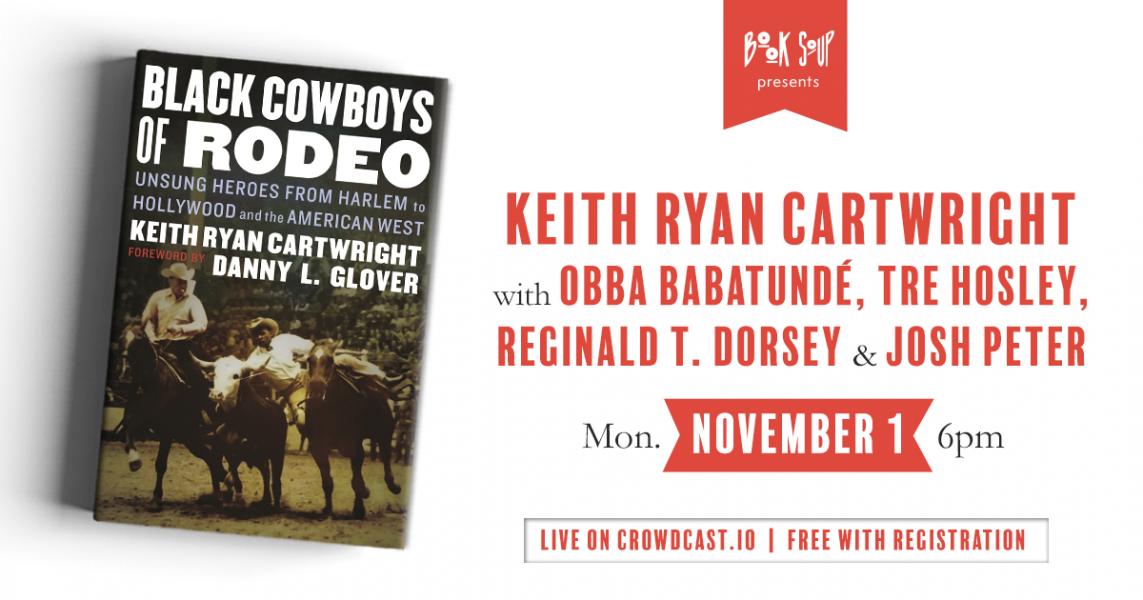 They ride horses, rope calves, buck broncos, ride and fight bulls, and even wrestle steers. They are Black cowboys, and the legacies of their pursuits intersect with those of America's struggle for racial equality, human rights, and social justice.
Keith Ryan Cartwright brings to life the stories of such pioneers as Cleo Hearn, the first Black cowboy to professionally rope in the Rodeo Cowboy Association; Myrtis Dightman, who became known as the Jackie Robinson of Rodeo after being the first Black cowboy to qualify for the National Finals Rodeo; and Tex Williams, the first Black cowboy to become a state high school rodeo champion in Texas.

Black Cowboys of Rodeo is a collection of one hundred years of stories, told by these revolutionary Black pioneers themselves and set against the backdrop of Reconstruction, Jim Crow, segregation, the civil rights movement, and eventually the integration of a racially divided country. (University of Nebraska Press)

OBBA BABATUNDE is an actor, writer, director, and producer. He’s a singer and a dancer. Those describe what he does, not who he is. Babatunde is a cowboy who rides and trains horses daily. One of the most recognizable men on television and the big screen, he is a series regular on S.W.A.T. and Dear White People and, until last year, he was also on The Bold and the Beautiful. And yet, the Emmy-winner is a horse whisperer and rodeo competitor, who regularly serves as an honorary grand marshal for the Bill Pickett Invitational Rodeo.

KEITH RYAN CARTWRIGHTis a communications specialist for the Rutherford County Board of Education in Tennessee, an occasional adjunct professor at Middle Tennessee State University and a journalist. He previously served as editorial director and senior writer for Professional Bull Riders Inc.

REGINALD T. DORSEYis a cowboy who happens to be a successful actor in Hollywood. In 1991, he and Emmy-winning actor Glynn Turman won a team penning championship and when not acting — he most-recently appeared in the second season of 5th Wardand produced the film Kings of the Evening— he gives riding lessons at a stable just outside of Los Angeles. Dorsey is best remembered for appearing in television series 21 Jump Streetand the western Return to Lonesome Doveand regularly serves as Grand Marshal for the Bill Pickett Invitational Rodeo.