Kimberly Harrington, in conversation with Laura Benanti, discusses But You Seemed So Happy: A Marriage, in Pieces and Bits 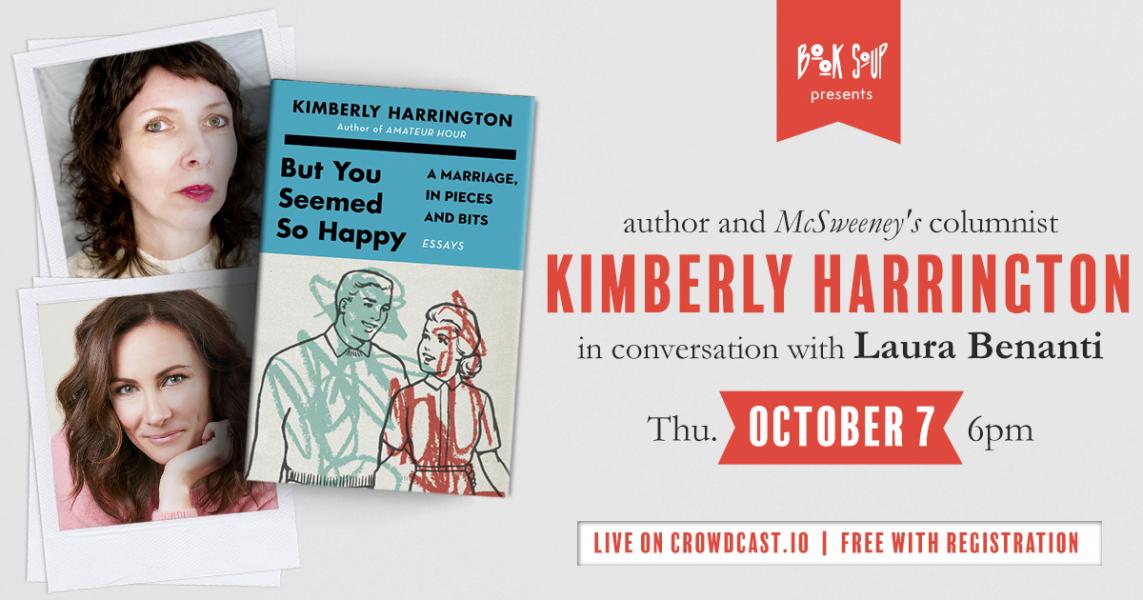 Six weeks after Kimberly and her husband announced their divorce, she began work on a book that she thought would only be about divorce -- heavy on the dark humor with a light coating of anger and annoyance. After all, on the heels of planning to dissolve a twenty-year marriage they had chosen to still live together in the same house with their kids. Throw in a global pandemic and her idea of what the end of a marriage should look and feel like was flipped even further on its head.

This originally dark and caustic exploration turned into a more empathetic exercise, as she worked to understand what this relationship meant and why marriage matters so much. Over the course of two years of what was supposed to be a temporary period of transition, she sifted through her past--how she formed her ideas about relationships, sex, marriage, and divorce. And she dug back into the history of her marriage -- how she and her future ex-husband had met, what it felt like to be madly in love, how they had changed over time, the impact having children had on their relationship, and what they still owed one another.

But You Seemed So Happy is a time capsule of sorts. It's about getting older and repeatedly dying on the hill of being wiser, only to discover you were never all that dumb to begin with. It's an honest, intimate biography of a marriage, from its heady, idealistic, and easy beginnings to it slowly coming apart and finally to its evolution into something completely unexpected. As she probes what it means when everyone assumes you're happy as long as you're still married, Harrington skewers engagement photos, Gen X singularity, small-town busybodies, and the casual way we make life-altering decisions when we're young. Ultimately, this moving and funny memoir in essays is a vulnerable and irreverent act of forgiveness--of ourselves, our partners, and the relationships that have run their course but will always hold profound and permanent meaning in our lives. (Harper)

Tony® Award-winner and five-time Tony® Award nominee Laura Benanti is a highly celebrated stage and screen actress. She currently stars in GOSSIP GIRL (HBO Max) and in WORTH (Netflix) opposite Michael Keaton, Stanley Tucci and Amy Ryan, for which she’s received significant praise for her "awards-worthy" performance. She recently reprised her role in the hit TV series YOUNGER and starred opposite Billy Crystal and Tiffany Haddish in the comedy film HERE TODAY. Next, Benanti will be seen in Lin-Manuel Miranda’s TICK, TICK…BOOM! (Netflix) this fall and on December 17, she will help usher in the holiday season and the return of the New York Pops at Carnegie Hall. Benanti’s other acting credits include CINEMA TOAST and ZIWE. She created and executive produced the HBO MAX special, HOMESCHOOL MUSICAL: CLASS OF 2020, co-authored with Kate Mangiameli a children’s board book M is for MAMA (and also Merlot): A Modern Mom’s ABC’s, and released a self-titled studio album for Sony Music Masterworks, comprised of contemporary covers, jazz influenced torch songs and comedic takes on beloved favorites.

But You Seemed So Happy: A Marriage, in Pieces and Bits (Hardcover)