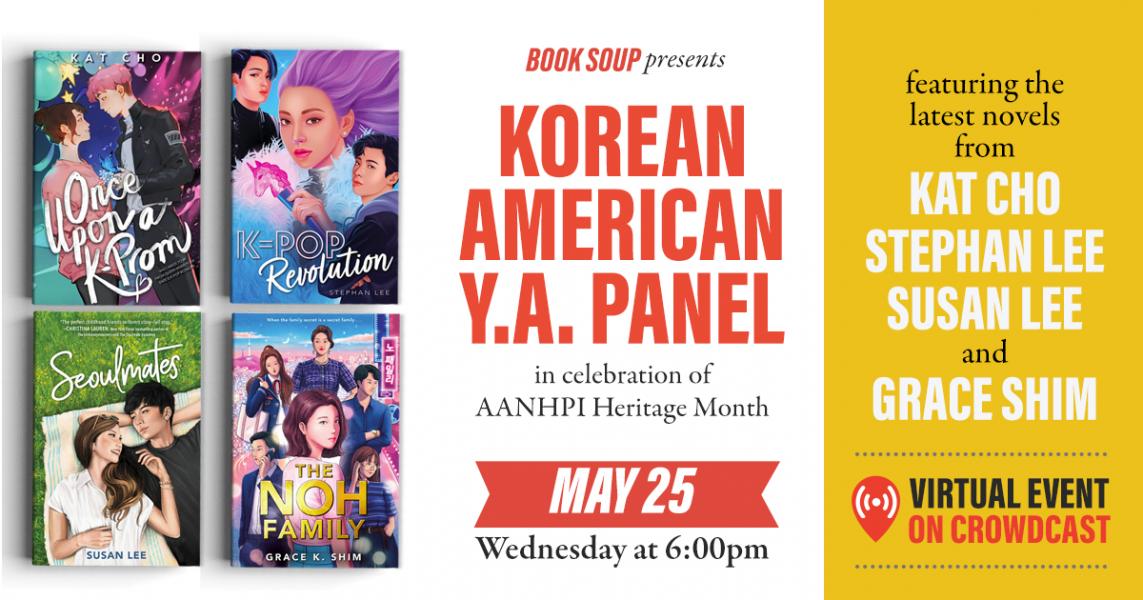 In celebration of AANHPI Heritage Month, authors Kat Cho, Stephan Lee, Grace K. Shim, and Susan Lee, join us to talk YA and present their latest!

Once Upon a K-Prom by Kat Cho
Elena Soo has always felt overshadowed. Whether by her more successful older sisters, her more popular twin brother, or her more outgoing best friend, everyone except Elena seems to know exactly who they are and what they want. But she is certain about one thing - she has no interest in going to prom. While the rest of the school is giddy over corsages and dresses, Elena would rather spend her time working to save the local community center, the one place that's always made her feel like she belonged.  So when international K-pop superstar Robbie Choi shows up at her house to ask her to prom, Elena is more confused than ever. Because the one person who always accepted Elena as she is? Her childhood best friend, Robbie Choi. And the one thing she maybe, possibly, secretly wants more than anything? For the two of them to keep the promise they made each other as kids: to go to prom together. But that was seven years ago, and with this new K-pop persona, pink hair, and stylish clothes, Robbie is nothing like the sweet, goofy boy she remembers. The boy she shared all her secrets with. The boy she used to love.  Besides, prom with a guy who comes with hordes of screaming fans, online haters, and relentless paparazzi is the last thing Elena wants - even if she can't stop thinking about Robbie's smile...right? (Disney-Hyperion)

K-Pop Revolution by Stephan Lee
In the sequel to K-Pop Confidential, Candace is a Rookie idol. Her life is suddenly filled with the fans, cameras, and glamor of stardom: She and her boyfriend, YoungBae, are a K-Pop power couple; she's a walking icon at Brandt Foreign School; and her new girl group, known simply as THE GIRLS, is poised to break records across the industry. With her status as the industry's K-Pop Warrior, she has all the clout at her disposal to make waves. Right? Her label, S.A.Y., promises to help make the sweeping changes for the industry to become a more humane and compassionate place for artists. But what will happen when the road to a record-breaking debut isn't as smooth as they'd planned? When a rival girl group emerges to steal the spotlight, carrying the message of change better than Candace ever could, she'll have to decide what it'll cost her and her bandmates to stand up for their beliefs. And as the world turns against her, with online bullies scrutinizing her every word, there's only so much that one person can take. (Point)

The Noh Family by Grace K. Shim
When her friends gift her a 23-and-Me test as a gag, high school senior Chloe Chang doesn't think much of trying it out. She doesn't believe anything will come of it--she's an only child, her mother is an orphan, and her father died in Seoul before she was even born, and before her mother moved to Oklahoma. It's been just Chloe and her mom her whole life. But the DNA test reveals something Chloe never expected--she's got a whole extended family from her father's side half a world away in Korea.

Turns out her father's family are amongst the richest families in Seoul and want to meet Chloe. So, despite her mother's reservations, Chloe travels to Seoul and is whisked into the lap of luxury . . . but something feels wrong. Soon Chloe will discover the reason why her mother never told her about her dad's family, and why the Nohs wanted her in Seoul in the first place. Could joining the Noh family be worse than having no family at all? (Kokila)

Seoulmates by Susan Lee
Hannah Cho had the next year all planned out--the perfect summer with her boyfriend, Nate, and then a fun senior year with their friends.
But then Nate does what everyone else in Hannah's life seems to do--he leaves her, claiming they have nothing in common. He and all her friends are newly obsessed with K-pop and K-dramas, and Hannah is not. After years of trying to embrace the American part and shunning the Korean side of her Korean American identity to fit in, Hannah finds that's exactly what now has her on the outs.
But someone who does know K-dramas--so well that he's actually starring in one--is Jacob Kim, Hannah's former best friend, whom she hasn't seen in years. He's desperate for a break from the fame, so a family trip back to San Diego might be just what he needs...that is, if he and Hannah can figure out what went wrong when they last parted and navigate the new feelings developing between them. (Inkyard Press)

Seoulmates by Susan Lee will be released in September 2022 but we are taking pre-orders at the link below.

Once Upon a K-Prom (Hardcover)