Michael Koppy presents and signs Words and Music Into the Future: A Songwriting Treatise and Manifesto 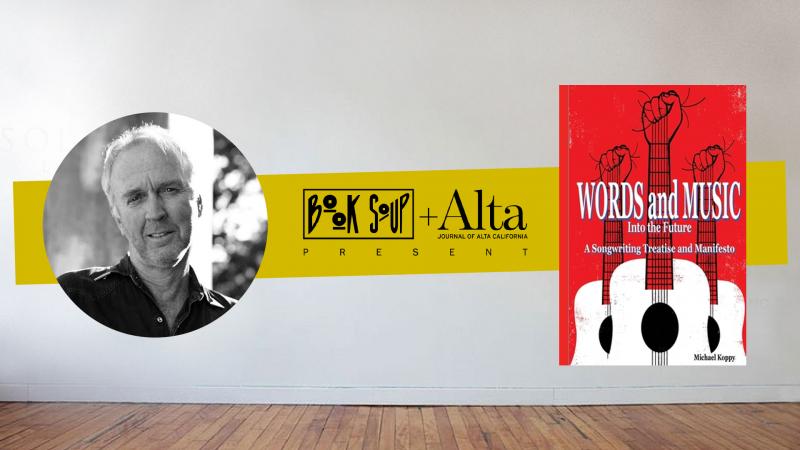 How did Neil Young become “The Poster Boy for Bad Songwriting”? What does Literary Modernism have to do with what we hear every damn day? Why should composers study cultural critic Susan Sontag before even naming a song? What makes Bob Dylan “The Donald Trump of Songwriting”? Even if you know absolutely nothing about music, can you really compose an original tune—maybe even a great one? (Answer: yes!) Was Edgar Allan Poe completely WRONG about popular songs? Was George Carlin RIGHT?!? Is Quincy Jones confused about what makes a song great? Steve Sondheim on music: a) right? B) wrong? C) just jealous? Paul McCartney: schooled by Sinatra, Elvis, and Marvin Gaye—but did he actually learn the lesson?

Literary criticism, songwriting analysis, and cultural commentary, Words and Music Into the Future is an uncompromising examination of the current state of popular songs and songwriting in the English-speaking world. Devoid of hero worship and celebrity gossip, using mostly well-known songs from recent decades as examples, Michael Koppy presents a compelling case that we listeners have been force-fed a steady diet of industrial illiteracy, and that the timer has come for songwriting and song criticism to riser to greater heights.  Whether you agree or disagree with the challenging, even heretical ideas presented in Words and Music Into the Future, it will forever change how you think about and hear popular music.

Words and Music Into the Future: A Songwriting Treatise and Manifesto (Paperback)