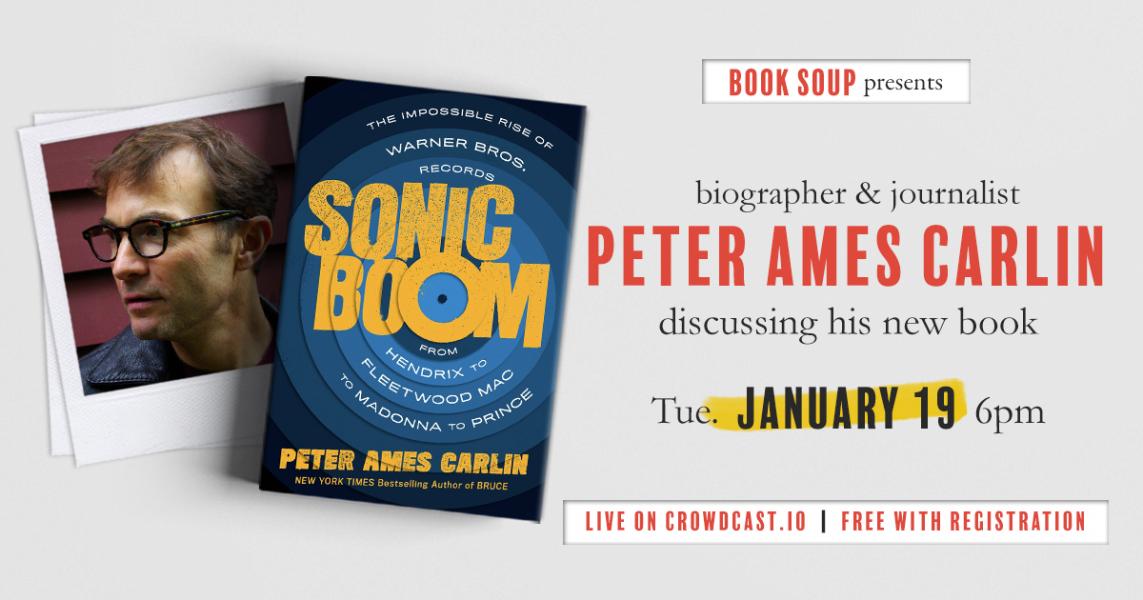 From journalist Peter Ames Carlin--the New York Times bestselling music biographer who chronicled the lives and careers of Paul McCartney, Bruce Springsteen, the Beach Boys, and Paul Simon--Sonic Boom captures the rollicking story of the most successful record label in the history of rock and roll, Warner Bros Records, and the remarkable secret to its meteoric rise.

The roster of Warner Brothers Records and its subsidiary labels reads like the roster of the Rock & Roll Hall of Fame: Jimi Hendrix, the Grateful Dead, Joni Mitchell, Neil Young, James Taylor, Fleetwood Mac, the Eagles, Prince, Van Halen, Madonna, Tom Petty, R.E.M., Red Hot Chili Peppers, and dozens of others. But the most compelling figures in the Warner Bros. story are the sagacious Mo Ostin and the unlikely crew of hippies, eccentrics, and enlightened execs who were the first in the music business to read the generational writing on the wall in the mid-1960s. By recruiting outsider artists and allowing them to make the music they wanted, Ostin and his staff transformed an out-of-touch company into the voice of a generation. Along the way, they revolutionized the music industry and, within just a few years, created the most successful record label in the history of the American music industry.

How did they do it? It all goes back to the day in 1967 when the newly tapped label president Mo Ostin called his team together to share his grand strategy for the struggling company: "We need to stop trying to make hit records. Let's just make good records and turn those into hits."

With that, Ostin ushered in a counterintuitive model that matched the counterculture. His offbeat crew reinvented the way business was done, giving their artists free rein while rejecting out-of-date methods of advertising, promotion, and distribution. And even as they set new standards for in-house weirdness, the upstarts' experiments and innovations paid off, to the tune of hundreds of legendary hit albums.

It may sound like a fairy tale, but once upon a time Warner Bros Records conquered the music business by focusing on the music rather than the business. Their story is as raucous as it is inspiring, pure entertainment that also maps a route to that holy grail: love and money. (Henry Holt & Company)

Sonic Boom: The Impossible Rise of Warner Bros. Records, from Hendrix to Fleetwood Mac to Madonna to Prince (Hardcover)