Ron Friedman discusses and signs I Killed Optimus Prime: How One Man Single-Handedly Destroyed the World's Most Formidable Transformer... and Lived to Tell the Tale 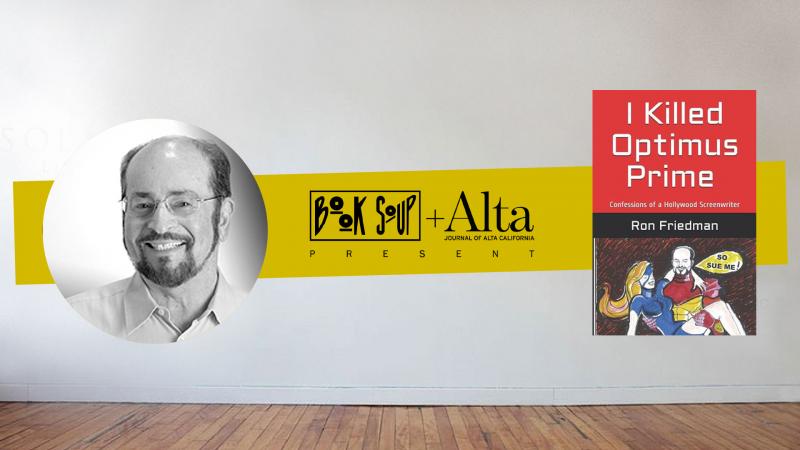 Only one man could write "I Killed Optimus Prime" because he did, in fact, kill off the last-born of the original Thirteen Transformers who remains the superhero leader of the Autobots, those sentient self-configuring modular extraterrestrial robotic lifeforms which have become global cultural icons.In this book, Ron Friedman--widely known as the most prolific television writer in the history of the medium--shares the intimate details of a life and career that started with him cracking jokes to avoid death-by-schoolyard-bullies on the dusty streets of Weirton, West Virginia, took him through the world of professional architecture and finally through the gilded gates of every major Hollywood studio as the creative force behind nearly every hit TV series of his generation. His scripts for shows like FANTASY ISLAND, CHICO & THE MAN, STARSKY & HUTCH, ALL IN THE FAMILY, HAPPY DAYS are among more than 700 hours of his produced credits. With more than 40 feature film screenplays to his credit, Ron is a recognized screenwriting expert who has actually "been there and done that."A frequent collaborator and close friend of the late Marvel Comics genius Stan Lee, Ron is a multiple Emmy nominee most well known for his animation work, having created the characters and developed the material for major projects like G.I. JOE, THE MARVEL ACTION HOUR, THE TRANSFORMERS: THE MOVIE, IRON MAN, and THE FANTASTIC FOUR. This book is far more than a mere "memoir" and is a must-read for anyone working toward a Hollywood writing career. As a veteran Professor of Screenwriting at Chapman University's Dodge College of Film and Media Arts and as Senior Judge at The Los Angeles International Screenplay Awards, Friedman's insights into the craft and profession of screenwriting are pure gold. Read what he has to say here and you won't need to bother with all the self-promoting so-called "experts" (most of whom have never written or sold a single script!) have to say. Woven throughout this fast-paced tale are plenty of "inside the studio" stories and revelations about the personal lives of celebrities, all recounted with dazzling wit and the ribald candor (can you handle the truth?) that will have you either gasping in shock or on your knees with laughter. I Killed Optimus Prime is far more than a breezy "Hollywood" read. It's the stuff of true genius from a Hollywood veteran who pulls out all the stops, lets it all hang out...and isn't worried about tucking any of it back in. WARNING: before you open this book, buckle your seatbelt. This is one very WILD RIDE!

I Killed Optimus Prime: How One Man Single-Handedly Destroyed the World's Most Formidable Transformer... and Lived to Tell the Tale. (Paperback)