Ryan Dusick discusses Harder to Breathe: A Memoir of Making Maroon 5, Losing It All, and Finding Recovery 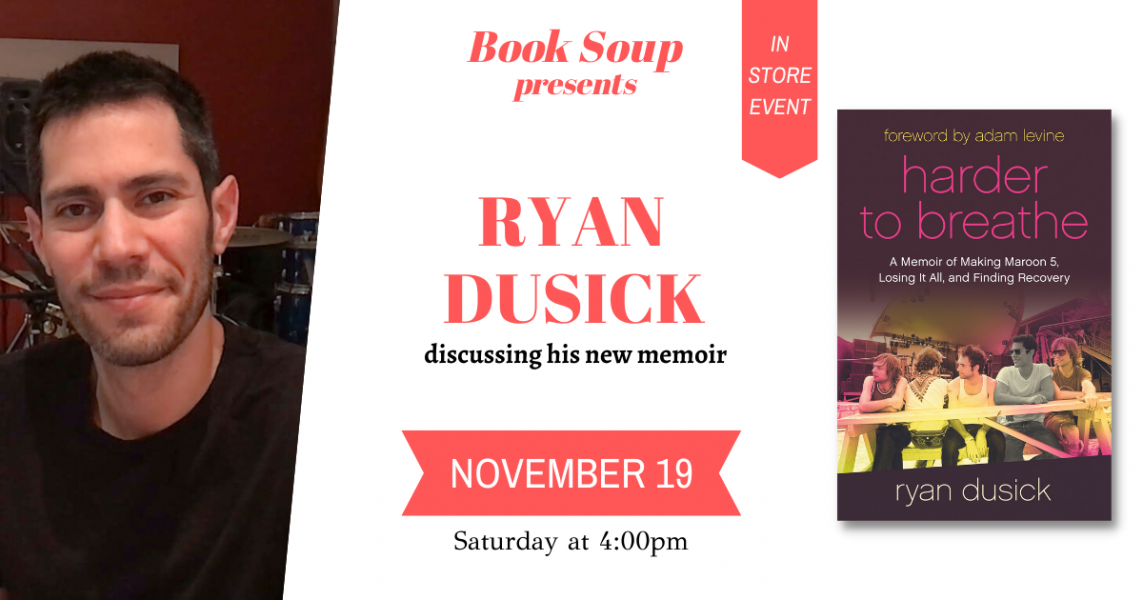 In the nineties, Ryan Dusick and his friends Adam Levine and Jesse Carmichael dreamed about making it big . . . and against all odds, they did. This inside story recounts Maroon 5's founding and their road to becoming Grammy-winning megastars, told through the eyes of former drummer Ryan Dusick. He takes readers behind the scenes of the band's meteoric rise to success--and the grueling demands that came with it--as well as his personal struggles with anxiety and addiction after his departure from the band.

For Maroon 5, fame came with a platinum debut record, jam sessions with Prince in his own living room, and encounters with celebrities such as Jessica Simpson, Justin Timberlake, John Mayer, and Bono. For Dusick, stardom came to an abrupt halt with the devastating loss of his ability to play drums due to chronic nerve damage.

Alongside Maroon 5's story of camaraderie and pressure, Dusick interweaves his own narrative: a decade lost to liquor and antianxiety medication, his ferocious commitment to recovery, and his current perspective as a professional counselor. With a candor that will speak to anyone who has struggled with mental health, Harder to Breathe moves beyond celebrity to examine the nature of human heartbreak and resilience, and to buoy anyone currently facing similar challenges.

Ultimately, Harder to Breathe is a roller-coaster memoir about how making it to the top sent Dusick to the bottom--and how he let go of the past and embraced a new future, one breath at a time. (Benbella Books)

Harder to Breathe: A Memoir of Making Maroon 5, Losing It All, and Finding Recovery (Hardcover)