Scott Meslow, in conversation with Kerensa Cadenas, discusses From Hollywood with Love: The Rise and Fall (and Rise Again) of the Romantic Comedy 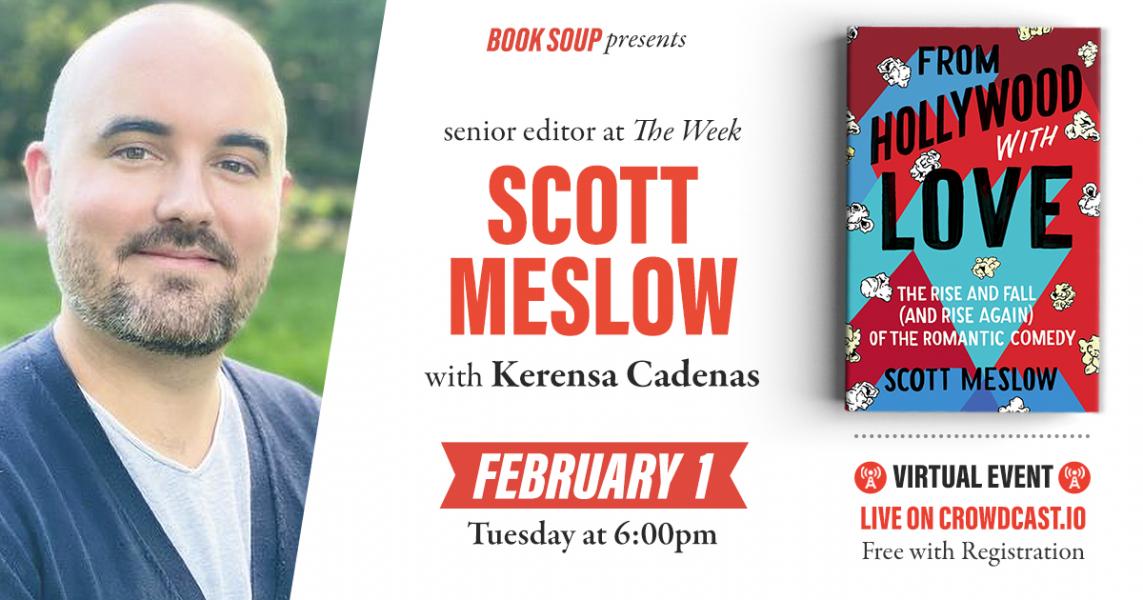 No Hollywood genre has been more misunderstood--or more unfairly under-appreciated--than the romantic comedy. Funny, charming, and reliably crowd-pleasing, rom-coms were the essential backbone of the Hollywood landscape, launching the careers of many of Hollywood's most talented actors and filmmakers, such as Julia Roberts and Matthew McConaughey, and providing many of the yet limited creative opportunities women had in Hollywood. But despite--or perhaps because of--all that, the rom-com has routinely been overlooked by the Academy Awards or snobbishly dismissed by critics. In From Hollywood with Love, culture writer and GQ contributor Scott Meslow seeks to right this wrong, celebrating and analyzing rom-coms with the appreciative, insightful critical lens they've always deserved.

Beginning with the golden era of the romantic comedy--spanning from the late '80s to the mid-'00s with the breakthrough of films such as When Harry Met Sally--to the rise of streaming and the long-overdue push for diversity setting the course for films such as the groundbreaking, franchise-spawning Crazy Rich Asians, Meslow examines the evolution of the genre through its many iterations, from its establishment of new tropes, the Austen and Shakespeare rewrites, the many love triangles, and even the occasional brave decision to do away with the happily ever after.

Featuring original black-and-white sketches of iconic movie scenes and exclusive interviews with the actors and filmmakers behind our most beloved rom-coms, From Hollywood with Love constructs oral histories of our most celebrated romantic comedies, for an informed and entertaining look at Hollywood's beloved yet most under-appreciated genre. (Dey Street Books)

Kerensa Cadenas is a Brooklyn based editor and writer. She's currently the Editorial Director of Entertainment at Thrillist. Before that, she's worked at The Cut, Entertainment Weekly, Vanity Fair, Cosmopolitan and Complex. She's usually squawking about Harry Styles, depressed lady protagonists, and her perfect cat, Cricket.

From Hollywood with Love: The Rise and Fall (and Rise Again) of the Romantic Comedy (Hardcover)