Sylvain Neuvel, in conversation with James Rollins, discusses A History of What Comes Next: A Take Them to the Stars Novel 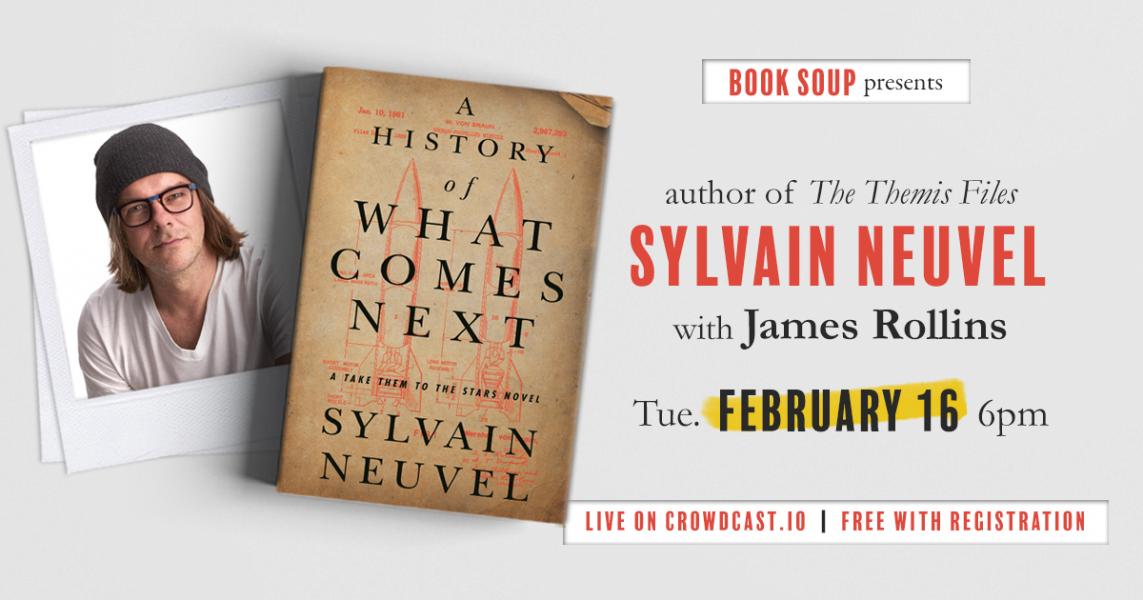 Showing that truth is stranger than fiction, Sylvain Neuvel weaves a sci-fi thriller reminiscent of Blake Crouch and Andy Weir, blending a fast moving, darkly satirical look at 1940s rocketry with an exploration of the amorality of progress and the nature of violence in A History of What Comes Next.

Survive at all costs.

Take them to the stars.

Over 99 identical generations, Mia's family has shaped human history to push them to the stars, making brutal, wrenching choices and sacrificing countless lives. Her turn comes at the dawn of the age of rocketry. Her mission: to lure Wernher Von Braun away from the Nazi party and into the American rocket program, and secure the future of the space race.

But Mia's family is not the only group pushing the levers of history: an even more ruthless enemy lurks behind the scenes.

A darkly satirical first contact thriller, as seen through the eyes of the women who make progress possible and the men who are determined to stop them... (Tordotcom)

James Rollins is the #1 New York Times bestselling author of international thrillers and the forthcoming fantasy epic, Starless Crown. His writing has been translated into more than forty languages and has sold more than 20 million books. The New York Times says, “Rollins is what you might wind up with if you tossed Michael Crichton and Dan Brown into a particle accelerator together.” NPR calls his work, “Adventurous and enormously engrossing.” Rollins unveils unseen worlds, scientific breakthroughs, and historical secrets matched with stunning suspense. As a veterinarian, he had a practice in Sacramento for over a decade and still volunteers at local shelters. Nowadays, Rollins shares his home up in the Sierra Nevada Mountains with his two golden retrievers, Echo and Duncan. He also enjoys scuba diving, spelunking, kayaking, and hiking. Of course, he loves to travel and experience new places around the world, which often inspire his next globe-trotting adventure.

A History of What Comes Next: A Take Them to the Stars Novel (Hardcover)