Tracy Dawson, in conversation with Steph Ouaknine, discusses Let Me Be Frank: A Book about Women Who Dressed Like Men to Do Shit They Weren't Supposed to Do 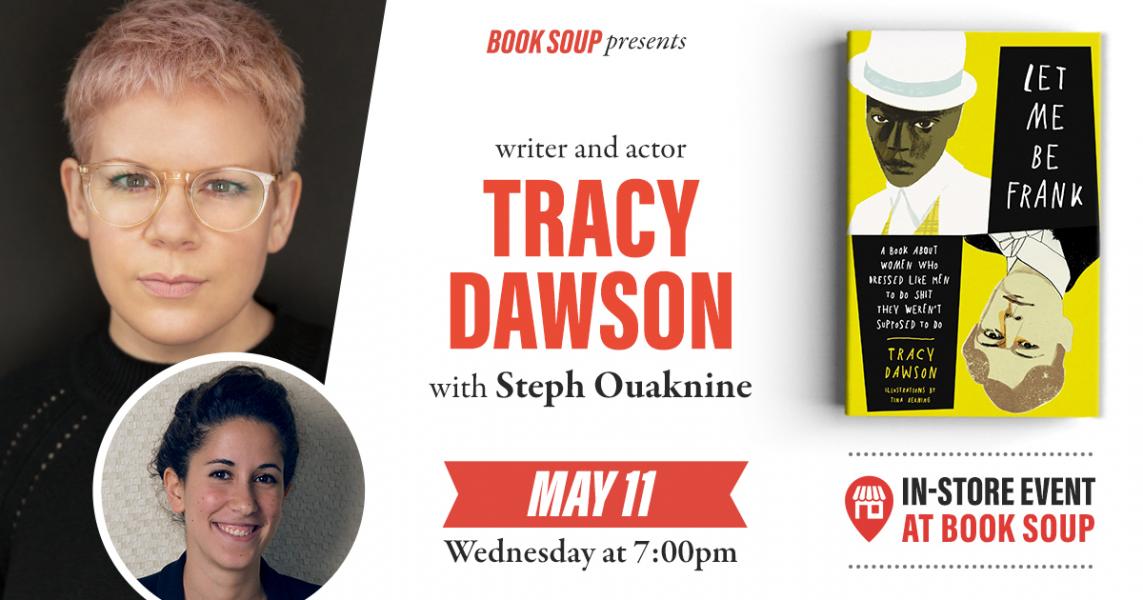 In this entertaining and eye-opening collection, writer, actor, and feminist Tracy Dawson showcases trailblazers throughout history who disguised themselves as men and continuously broke the rules to gain access and opportunities denied them because they were women.

Let Me Be Frank illuminates with a wry warmth the incredible stories of a diverse group of women from different ethnicities and cultural backgrounds who have defied the patriarchy, refusing to allow men or the status quo to define their lives or break their spirit. An often sardonic and thoroughly impassioned homage to female ingenuity and tenacity, the women profiled in this inspiring anthology broke the rules to reach their goals and refused to take "no" for an answer. These women took matters into their own hands, dressing--sometimes literally, sometimes figuratively--as men to do what they wanted to do. This includes competing in marathons, publishing books, escaping enslavement, practicing medicine, tunneling deep in the earth as miners, taking to the seas as pirates and serving on the frontlines in the military, among many other pursuits. Not only did these women persist, many unknowingly made history and ultimately inspired later generations in doing so. This compendium is an informative and enthralling celebration of these revolutionary badasses who have changed the world and our lives.

Let Me Be Frank is filled with more than two dozen specially commissioned, full-color illustrations and hand-lettering by artist Tina Berning, whose multi-award-winning work has been published in numerous publications and anthologies worldwide, and is designed by Alex Kalman. (Harper Design)

"Tracy has such a gift for storytelling and making history leap off the page. Her book has a wit that suggests it was written by a man since everyone knows women aren't this funny.”—Kay Cannon, writer, producer, director (Pitch Perfect, Blockers)

“I came up with Tracy as a fellow sketch comedian on the vomit-soaked stages of the Toronto comedy scene. And like the brilliant, resourceful, rule-breaking, damn-well-stubborn sisters in Let Me Be Frank, Tracy is someone who gets the job done, and gets it done well.”—Samantha Bee

Actress and writer Tracy Dawson is no stranger to doing what she wants in a man’s world, having been a part of the entertainment and comedy scene for years. Tracy began on the mainstage of the world renowned Second City in Toronto. In 2009 Tracy won an emerging TV writer award at the Banff World Television Festival and was soon staffed as a writer (and later cast as a lead actor) on the Canadian comedy series, Call Me Fitz. Tracy went on to win the Gemini Award and the Canadian Screen Award for Best Lead Comedic Actress for her work opposite Jason Priestley on Fitz.

Tracy's play, them & us, was produced in 2009 by the prestigious Theatre Passe Muraille in Toronto. Also in 2009 (it was a big year!) Tracy starred in the Andrew Lloyd Webber/Ben Elton musical, The Boys in the Photograph. In 2014 Tracy wrote on the TBS sitcom Your Family Or Mine. She got to write jokes for Richard Dreyfuss and Ed Begley Jr. on that show. Ed called her a genius once. I’m just saying. Fans of Disney Channel Halloween movies know Tracy as the evil Deimata from Girl vs Monster (which invigorates her DMs every October!) Tracy was born in Ottawa, Canada and is currently based in Los Angeles where she lives with her life partner Isaac, who is a dog.

One of Canada's "5 to Watch in Entertainment," Steph Ouaknine is an award-winning producer, writer and development executive well versed in queer stories and international co-productions.

Steph is a 2021 Film Independent Episodic Lab Fellow, with scripted projects supported by the CFC/Netflix Accelerator, The National Screen Institute, the IFP/Gotham Film Week and SeriesMania 2022.

Let Me Be Frank: A Book About Women Who Dressed Like Men to Do Shit They Weren't Supposed to Do (Hardcover)